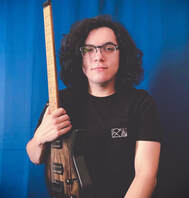 ​ Carlos Hugo Rodriguez is a full-time musician and graduate of California State University Dominguez Hills who studied under the direction of guitarist Julian Coryell. He has played in numerous clubs and venues around the Los Angeles Area (including the Slide Bar, Chain Reaction, and Malone’s concert venue) with his band Lydian Arrow. As well as performed for local school events (such South Torrance High School) and has been the musical director and performer in Cal State Dominguez Hills’ theatre department in the play “Seven Guitars” (directed by Jozben Barrett). Carlos would like to continue his music career by improving his abilities on his instrument, play with other talented musicians, write and produce music for himself and his clients and to teach private students and guide them through their musical journey.
De Ana Abinante, Jazz Vocal $1,000.00 Ruth Cuccia Memorial Scholarship 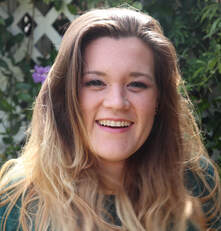 ​ De Ana Abinante is a 23-year-old, passionate, singer/songwriter/musician, and youth advocate, currently pursuing a degree in Jazz Vocal Performance at El Camino College. As an artist, she carries a particular emphasis in her message to inspire young people towards their dreams and to uplift them to fight through the challenges that they face in their lives. De Ana has performed all over the L.A. area and around the West Coast, including performing and hosting her own live and virtual home concert series, Freedom Cry, in 2018, and Heart Cries in 2019 - 2020. In September 2017, she released her debut, 5 song EP, War Cry, and is currently working on her next album Heart Cries, with plans to release it in early 2021. De Ana also teaches music at Cal Heights Music School in Long Beach and started her own online music academy, Young Song Learners.
Aaron Greer, Tenor $500.00 Patron Scholarship 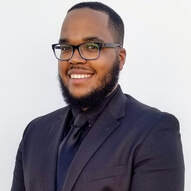 ​  Aaron Greer is a transfer student from El Camino College where he studied classical voice under Dr. Kevin Blickfeldt. He is now a senior majoring in music education with an emphasis in voice at Cal State Dominguez Hills where he studies under Professor Kendra Vuk. He was named a Presidential Scholar and received the Presidential Scholarship, which is a full-tuition academic scholarship that is awarded to very few high-achieving incoming freshmen and transfer students. It is one of the highest honors at California State University Dominguez Hills. Aaron is planning to graduate in the Spring of 2021, and to earn a Bachelor of Arts in Music Education. He looks forward to either pursuing a master’s degree in Performance or to continuing his studies in Music Education beginning the process to obtain his teaching credentials.
Cassiddy Feskowetz, Soprano $500.00 Patron Scholarship 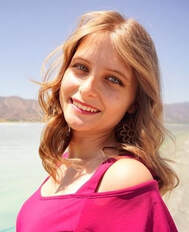 ​ Cassiddy Feskowetz is an undergrad in her Junior year at CSU Northridge. She recently transferred from El Camino College and has been involved in the Opera Workshop program every single semester she has been there, portraying a lengthy catalogue of roles in scenes, including Zerlina in "Don Giovanni," Maria in "West Side Story," and Mabel in "Pirates of Penzance". She has also been involved in the ECC Chorale and the Concert Choir, achieving soprano solos for Mozart's "Requiem" and John Rutter's "Gloria." She will be performing with the ECC Orchestra in their 2021 season. Cassiddy has been awarded Honors in Jury Performance for four semesters in the Applied music program at El Camino College, and has performed in master classes for Pamela Blanc and Daryl Taylor. She has also performed for the L.A. Opera League. Cassiddy would like to thank her teachers, Vicki Muto (ECC) and Shigemi Matsumoto (CSU Northridge).
I-Chun Kuo, Piano $250.00 Pearl Kim Award 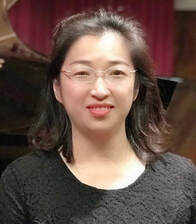 ​ Born in Taipei, Taiwan, I-Chun Kuo began her piano studies at the age of four. She won first place in the Taipei Piano Competition and was awarded Honorable Mention in the final round in the Taiwan Piano Competition. After studying with Dr. Karen Follingstad at San Diego State University, she continued her studies with Prof. Lois Roberts at El Camino College. At El Camino, I-Chun was awarded the Norma Kayser Memorial Endowment for the Arts Scholarship. She also received applied music juries honors and was selected to perform in the master class for Kenny Broberg, the 2017 Cliburn Silver Medalist. Her performance experience includes college recitals and as a soloist in the concert choir concert. She plays chamber music and is currently a church accompanist in Torrance. She is also a Yamaha certified teacher. She would like to continue her passion for piano performance, as well as being a chamber musician and a piano teacher.
​Brenda Osorio, Soprano $250.00 Memorial Scholarship 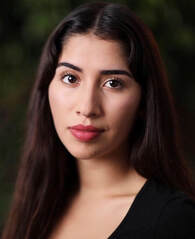 ​ Brenda Osorio is a 19-year-old classical voice major. She just completed her second year studying with Dr. Muto at El Camino college. She has received three scholarships including: Phyllis Hausman Loeb Scholarship, Norma Kayser Memorial Endowment for the Arts Scholarship, and a Mu Phi Epsilon Scholarship. She has participated in musicals all throughout her life and recently had the opportunity to perform for the LA opera league in February 2020. She plans to transfer to a conservatory as soon as possible so she can continue her training to be a professional opera singer. Brenda is extremely thankful for organizations such as Mu Phi Epsilon for providing support to young singers such as herself.